There’s still about two more weeks of farmer’s market shopping left in the season, but I have both freezers full and no more room. I’m really glad this time I followed my own advice and labeled each bag, then kept a running tally on a large sheet of paper taped to the side of the fridge. That way I can locate which shelf has the beans, how many packages of squash I have left, and when I need to buy more burgers, instead of getting frostbit trying to shuffle everything around and remember. 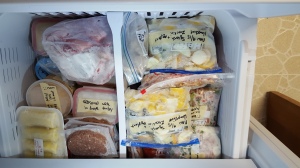 It’s already working out great. I’ve had a weird schedule the last few weeks, I’ve done some volunteer work plus had meetings to go to, most were in the evening. Being able to grab a serving size of meat, bag of frozen vegetables, then just quickly cook up some rice or pasta and season it, really makes a huge difference. It’s on the table in less than 30 minutes and I’m not doing the tedious work either of cleaning, peeling, chopping, measuring. We eat all fresh food (well, except the rice or pasta, but nobody’s perfect) and don’t spend money on takeout.

Got a deal on a discounted rotisserie chicken – usually close to the end of the day, if they haven’t sold, they mark them down to about $4.50 from $6 at Bi-Lo. One rotisserie chicken so far has made 10 servings and I’m only about a third of the way through it. Plus, I slow cook the bones and skin to make stock along with any odds and ends of vegetables, and various things that would normally be discarded. I cook it on low overnight, then strain out all the solids and use the stock for recipes, soup, stew, etc. In this one, I have the chicken bones, plus a hot pepper that was getting wilted, a lemon that I might not have used in time, a half cup of pineapple juice, a half cup of red wine leftover from a different recipe, some cloves of garlic that were wilting and not being used in time, some broccoli stalks where I had cut the florets off for another dish, some carrot ends, and I forget what else. It made such a rich stock, after I strained out all the solids, I just added a frozen packet of carrots, celery and onion (already cleaned and cut up) and a few pieces of the rotisserie chicken, and it made a seriously tasty soup.

When I have discarded pieces of fruits and vegetables (like lemon peels, broccoli stalks, partially wilted peppers, etc.) I put them in a snack size baggie and put them in the front corner at the top of my freezer. Then, when I’m ready to do a stock, I have at the fingertips several things to add. It builds up a while, then a deal comes along and I have bones, then they get used.

So, I’ve noticed there’s been some good deals lately at Publix, Aldi, Bi-Lo, and in some other flyers for canned goods. I’ve seen really good prices on Progresso, Campbells, plus spaghetti sauces, store brand canned vegetables, and canned chili and tuna. To do this sort of thing right, look at what your family would realistically eat – or what you can use to make some great recipes – and stock up when they are at the lowest price.

What you will do is buy what you normally buy at the store. Then, as you are putting things away in the cabinets, write the date on each can/bottle/container with a Sharpie. That’s all.

Then, when you USE UP that particular item, make either a shopping list note or at least a mental note of what that date was and what today is. You will get the idea quickly.

You would be surprised at how quickly you can train your brain to recognize patterns. That alone will help you when you shop. In the example above, you can already see how the person trying this method (and no other method!) would be more efficient, spend less money, make less trips to the store because she doesn’t run out of milk unexpectedly, can make useful donations to a local charity that doesn’t leave her short of a necessity, and doesn’t overbuy things that she doesn’t use as often.

If you want the super ninja bonus in this round, you’d keep track of these things … and buy a stockpile that suits you … such as six bags of flour when they are BOGO if you want to stock six months worth. But, at the very least, you will be consciously noticing how often you are using things and what your family really and truly uses, rather than guessing or being sucked into a sale at the grocery store on stuff you don’t use.